"Painting and poetry are like love; an exchange of blood, a passionate embrace, without restraint, without defence.  The picture is born of an overflow of emotions and feelings." 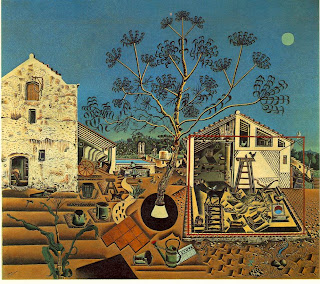 Miro, The Farm 'La Masia' (1921-22)
I learnt a great deal about Miro on a recent visit to the Tate.  I learnt a great deal about a lot more too.
Miro wanted to discover the sources of human feeling.  He described his method of creating poetry by way of painting, using a vocabulary of signs and symbols, metaphors and dream images to express definite themes he believed to be fundamental to human existence.
The exhibition displays his sense of humor and lively wit.  His chief concern was a social one; he wanted to get close to the great masses of humanity, and he was convinced that art can only truly appeal when it resonates with roots of lived experience.
"Wherever you are, you find the sun, a blade of grass, the spirals of the dragonfly.  Courage consists of staying at home, close to nature, which could not care less about our disasters.  Each grain of dust contains the soul of something marvelous." 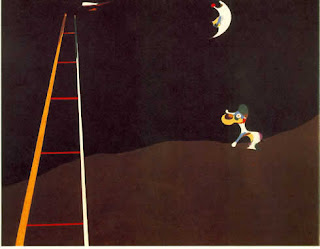 Miro, Dog barking at the Moon (1926)
"The spectacle of the sky overwhelms me.  I’m overwhelmed when I see, in an immense sky, the crescent of the moon, or the sun.  There, in my pictures, tiny forms in huge empty spaces.  Empty spaces, empty horizons, empty plains – everything which is bare has always greatly impressed me."
His work developed through distinct phases, and although he became involved with the Surrealist movement, and made use of its methods, he never accepted any doctrine or teachings.  Miro, it seems, wanted to stand apart from the crowd, rather than become identified with it, which he thought would narrow his creativity.
In 1936 Miro fled to Paris and during this period in necessary exile, his work began to achieve great power through increased simplicity, intensified color, and abstraction.  He responded to the world around him through a visual medium which was anything but silent.  Speaking of the Civil War:
"In the current struggle I see the antiquated forces of fascism on one side, and on the other, those of the people, whose immense creative resources will give Spain a drive that will amaze the world."
Miro enjoyed international acclaim during his long and productive career and has inspired generations of artists and sculptors.  His energy was inexhaustible, and Miro continued to produce his art and to experiment with form and subject long after the years of his initial celebrity had passed.  Drifting round the Tate on a Sunday afternoon, I was both absorped and transported elsewhere - to Spain, perhaps.  Miro was an artist whose work depicts a divided consciousness and an aesthetic indeterminacy.  Into his work, he vividly and unashamedly portrays the oppositions of his vision: Catalan and Parisian, traditionalist and Cubist, naif and cosmopolite. 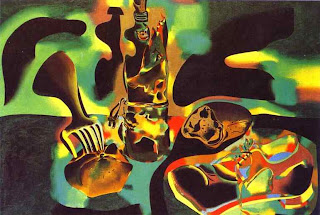 Miro, Still Life with Old Shoe 'Natura morta del sabatot' (1937)
"We see ourselves confronted with pure abstraction.  Small problems and highly obscure subjects are, if you will, always grand in intention, and the layman would casually and quite undisparagingly trample on them if they were to serve as carpet motifs."
﻿
Posted by Cecilia