"To be nobody but myself - in a world which is doing its best, night and day, to make me somebody else - means to fight the hardest battle any human can fight, and never stop fighting."
E. E. Cummings
Standing in a queue at the cash desk of a London department store recently, my attention was caught by a little boy dressed up in high heels and a long T shirt which he was sporting as a rather fetching dress and, to complete the outfit, a bra filled with sports socks.  As he admired himself in the handily situated mirror which stood on the floor, he looked pleased at the look he had accomplished.
My fellow shoppers, including his mother, seemed not to give him a second glance.  He seemed so content, and was quite happy amusing himself, in a way that appeared both familiar and comfortable.  I was struck by the scene for different reasons, but what really caught my eye was the exuberant joy that emanated from it.

He had an enthusiastic aide who was, most likely, a sister, cousin or friend, who had also donned sophisticated footwear, but whose gait in them seemed less poised.  The two of them took turns adjusting their cleavage in the mirror, with a very clear idea in mind as to the look they wished to achieve.

There was tremendous freedom, without any inhibition.  The only pressure was time - his mother was in the queue in front of me, and having made her purchase, wanted to leave the store but not before she agreed to take a few posed snaps of her son in his chosen attire.  It was only after he inspected and approved the photos on her iPhone that the trio left, the bras having been taken off, and returned to the small hangers and the racks they adorned.
I found myself wondering at what age that expression might become troublesome, and for whom. 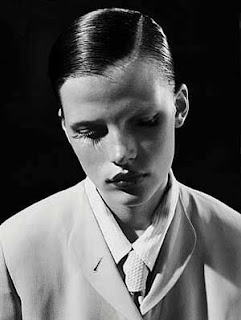 "There is no greater agony than bearing an untold story inside you."  Maya Angelou
"You can't base your life on other people's expectations."
Stevie Wonder
Posted by Cecilia