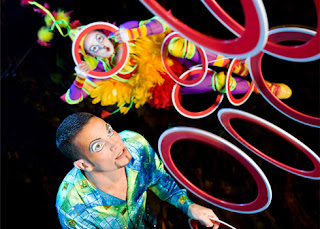 If ever I needed a fix of something out of this world it was this week.  I was lucky enough to get tickets at very short notice to see one of Cirque du Soleil's 23 current shows touring the globe: La Nouba.  It exceeded any expectations I might unknowingly have taken with me into the auditorium.  From the opening scene I was gripped.  Sitting on the edge of my seat, motionless, holding my breath watching in awe and amazement the spectacle that I was met by. 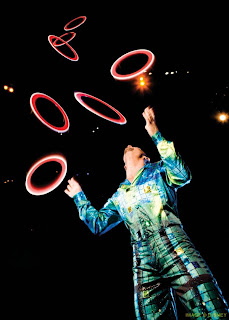 The show really was breathtaking.  Watching men fly through the air, between trapeze, and later juggling impossible numbers of different shaped objects, witnessing people jump higher on a trampoline than I thought possible, in order to perform precision flips and twists whilst airborne!  The entertainment is a feast for all with high wires, BMX bikes, Chinese diabolo sequences and skipping ropes used in ways you couldn't imagine without having seen this show.  The stunning choreography and magnificent range of acts are ingeniously blended together to form an unforgettable experience.  As the performance continued I lost count of the number of times I exclaimed 'unbelievable' or 'unreal', for it really was, and I was struggling to consider myself as a the same species as those before me.  The athletic and gymnastic finesse was exceptional.  Never before have I seen anything like it.

If you haven't already, go and see it.

If you've been before, go again; I defy you not to be wow-ed by it all over again.
This was my Cirque debut, and I cannot believe I've neglected these truly magical shows.  Cirque started in Quebec, in 1984 when 73 people worked for the outfit.  They modestly claim to provide high-quality, artistic entertainment and their product has grown to be a global phenomenon with over 5,000 employees worldwide, including more than 1,300 artists.  They are, quite simply, the best at what they do, and certainly achieve their aims of evoking the imagination, invoking the senses and provoking the emotions of everyone who sees a show.  To date, more than 100 million spectators have seen a Cirque du Soleil show, and they forecast that close to 15 million people will see a show this year alone.  I am in good company.
Diabolos (Chinese yo-yo)
The diabolo, or Chinese yo-yo, is a children’s game. This entrancing act features four young Chinese performers all under the age of 14.  Holding two sticks linked by a string, they spin, juggle and toss heavy wooden spools through the air while performing flips and keeping time to the music.  In perfect synchronization they juggle the spools back and forth to each other without ever missing a beat. Demonstrating increasingly difficult manoeuvres, the artists attempt to outdo each other in dexterity and ingenuity.  The discipline and concentration that shows on their faces during their routine turns into genuine smiles, as the audience cheers their performance.
Ballet air et soie (Aerial Ballet in Silk)
Red silk ribbons drop down from above, flowing with gentle ease and grace just like the performers for this act who demonstrate their strength and agility, grace and beauty. No safety wires hold these artists in place as they coil themselves into a cocoon, fifty feet above the stage then seemingly free fall as they unwind towards the ground. Ballet is performed high above the stage as a lone artist wrapped in silk, floats effortlessly over the audience.  In a stunning display of grace and strength, the artists become one with the ribbon of red fabric that cradles them. This breathtaking aerial dance requires immense agility and flexibility, and allows the performers a wide latitude of acrobatic and artistic expression.
Grands volants (Flying Trapeze)
Four pendulum-like swings, on two different levels allow a perfectly synchronized aerialists team to swing 53 feet above the stage in an exhibition of magnificent rhythm and athleticism.  This innovative bi-level rigging enables the trapezists to create a visually arresting exhibition of rhythm and athleticism.  Timing is key when all four trapezes are swinging in tandem and the aerialists switch places – barely inches away from colliding.
Posted by Cecilia