The D Word: Ruby's (not so) Mad Confessions 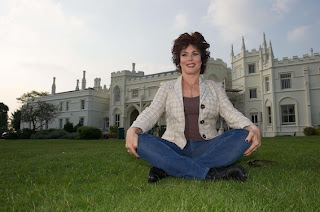 It had been in my diary for several weeks, and I was looking forward to seeing Ruby Wax's expose of the enduring stigma associated with mental health.  Rather like limescale that won't shift, or if it does, does so only temporarily, I feel that every opportunity to oust the skeletons from our metaphorical closets is to be celebrated.  So I sat up and listened.  I was moved by her honesty, and that of her family whom together presented a very real portrayal of their experience living alongside clinical depression, whether one's own, or that of someone you love.
"There is no manual that tells us how to live, we have to make it up as we go along."

Alongside our shared belief in the efficacy of mindfulness practice in everyday life as an approach that has the power to stop depression (and a host of other difficulties) in its tracks, it is Ruby's commitment to the cause of breaking down the taboo that surrounds our mental health that resonated somewhere deep inside.  It has gone unspoken about for too long.  With devastating consequences.  People carry enormous shame for having diagnoses and taking prescriptions that are now household names, yet seldom acknowledged by the community who seem to wish to see no evil, hear no evil and speak no evil.

Our wonderfully evolved minds plague us with problems that our reptilian ancestors would never have lost sleep over.  We desperately try to think our way out of difficulties and come up against the biggest of cognitive brick walls, adding to our despair and aggravating a deep sense of isolation.  1 in 4.  It's a staggering statistic for this is a hidden population.  Shame too often keeps us silent.
"This disease comes with a package: shame.
When any other part of your body gets sick you get sympathy."

Just as no one wanted to acknowledge the dreaded 'C' word until we realised we could ignore it no longer, the 'D' word remains contraband in many environments.  Ruby ingeniously highlighted the potential impact that disclosure of mental health issues in the workplace, but found three professionals whom were met with favourable responses (the cameras might have helped?)  Working in the field I do, I am all too aware that this is not always the way.  I doubt it's yet the norm.

Whilst society proudly claims equal opportunities, when it comes to matters of the mind, employers all too often freak out withdrawing what little support they might be able to offer when it matters most - when someone has taken the often daunting step of approaching the issue, and in doing so exposed an aspect of themselves that might not otherwise be available.

"Mental illness is a disease like diabetes, it cannot just be wished away."

Stigma and ignorance are intertwined.  Too little is understood by those who hold an important Duty of Care.  Too often there is a deficit of care and even less sense of duty that carries with it a responsibility - in sickness and in health.  If there is any madness in the situation, it is surely located here, rather than with those addressing their mental well being.

Looking for help for yourself, or someone else?
Visit Ruby's website: www.blackdogtribe.com