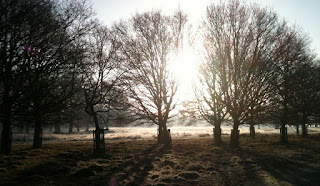 ...was the order of the day.  It was brilliant to get out on my bicycle this morning.  And even better to meet Charlotte for three laps of the waterlogged Richmond Park.  We pedalled steadily, and I enjoyed every moment of it.  Even when the wind picked up after mid morning tea break, and catching the spray off her rear wheel.  I can't think of posterior I'd rather follow.  I always learn lots when we ride together.  I have lots to learn.  Following her up the inclines, and along the flats, I aspire towards her seemingly natural balance of pressure and cadence.  Right, left, right, left.
It was positively thrilling to don some slightly ill fitting thermal bib tights, and get out in the (very) fresh air.  Pure delight having felt confined to the spin studio for what has been too long.  Coughs and colds banned me from there too before Christmas.  Now, whilst on holiday, I have been making the most of every opportunity to get back up to speed, firstly in the pool, and today, in the saddle. 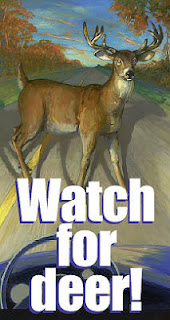 The park (which currently might more aptly be described as a lake) was relatively empty.  Most folk have presumably returned to work (or perhaps hit the sales), and the usual pack of Dynamos were replaced by a horse drawn carriage which made several circuits during our session.  We were joined by Jo, and greeted by the odd deer.  It was jolly pleasant.
I have yet to download Cyclemeter or similar, and currently lack a cycle-computer on my roadbike.  Today it really didn't matter.  Charlotte is recovering.  I am learning.  We make a great pair.  We did some good riding this morning, and weren't there striving for prizes.  She's collected many of those along the way.  I have yet to race.  But it is something of an ambition.  Having committed to swimming at least 300k in 2013 (not including the open water events I'm hoping to make regular features of my calendar next year), I have some cycling goals to figure out...