To cleat or not to cleat?

My ride today was possibly my favourite ever outing on two wheels.  An unplanned reconnaissance expedition, which took me out and about the North Somerset countryside for just shy of 32 miles.  I did not anticipate the climbs.  A precursory glance at an OS map might have been well advised.  My legs will doubtless tell the story tomorrow.  I had but one unfortunate mishap en route.  Having miscalculated an incline, I discovered myself to be a gear that was too high for the sharp incline.  There was no option other than to admit defeat, which I did none to gracefully crashing down on a welcoming verge which was thankfully there in lieu of a pavement. 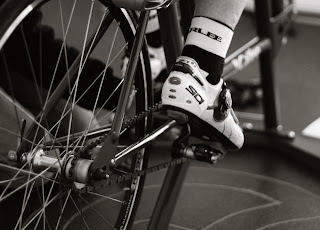 My being ‘in the regions’ meant that a concerned and charming motorist pulled over, to enquire as to whether I was alright.  I was.  She took one look at my cleats, and expressed disdain (on the basis of her own experience), suggesting that they were probably not advisable around the locality.  My cleats and shoes are currently integrally connected.  I think I’d rather crack on mastering my gear changing, than do away with these particular bits of kit.  But the generosity with which the advice was proffered stood out as a rather lovely reminder that I am out of the hustle and bustle where no one notices, and if they do, it doesn’t feel as though they have much time to care.